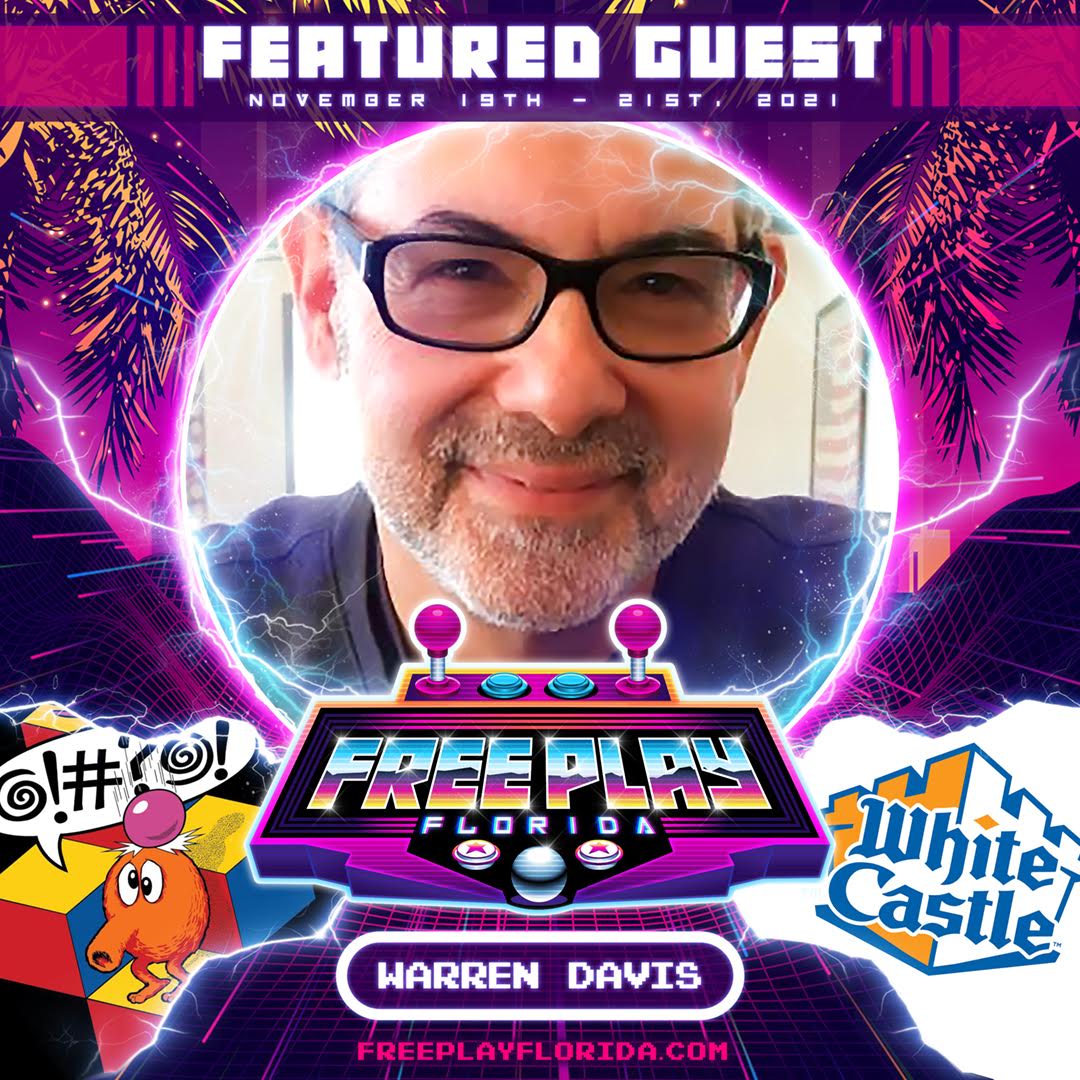 Warren Davis has been a favorite guest, and has been featured as one of White Castle restaurants "Craver. Gamer. Hall of Famer." recipients. Well known as one of the most entertaining personalities in the classic gaming world, Warren Davis will be appearing each day of the event, greeting fans, sharing his unique and witty perspective on classic gaming, and signing autographs!
Credited with bringing one of the most popular video game characters of all time to life (alongside friend and co-creator, Jeff Lee) in the 1982 arcade classic Q*Bert, Davis has gone on to see the popular and quirky little orange creature ported to numerous consoles over the span of nearly four decades. Q*Bert has also been featured in dozens of magazines, television shows, comics, and big budget motion pictures such as Wreck-It Ralph. More recently, Davis has created the digitalization system used to bring games like T2, NBA Jam, Mortal Kombat (and MANY others) to life, and he once again achieved cult legend status with his work on the laserdisc game, Us Vs. Them! 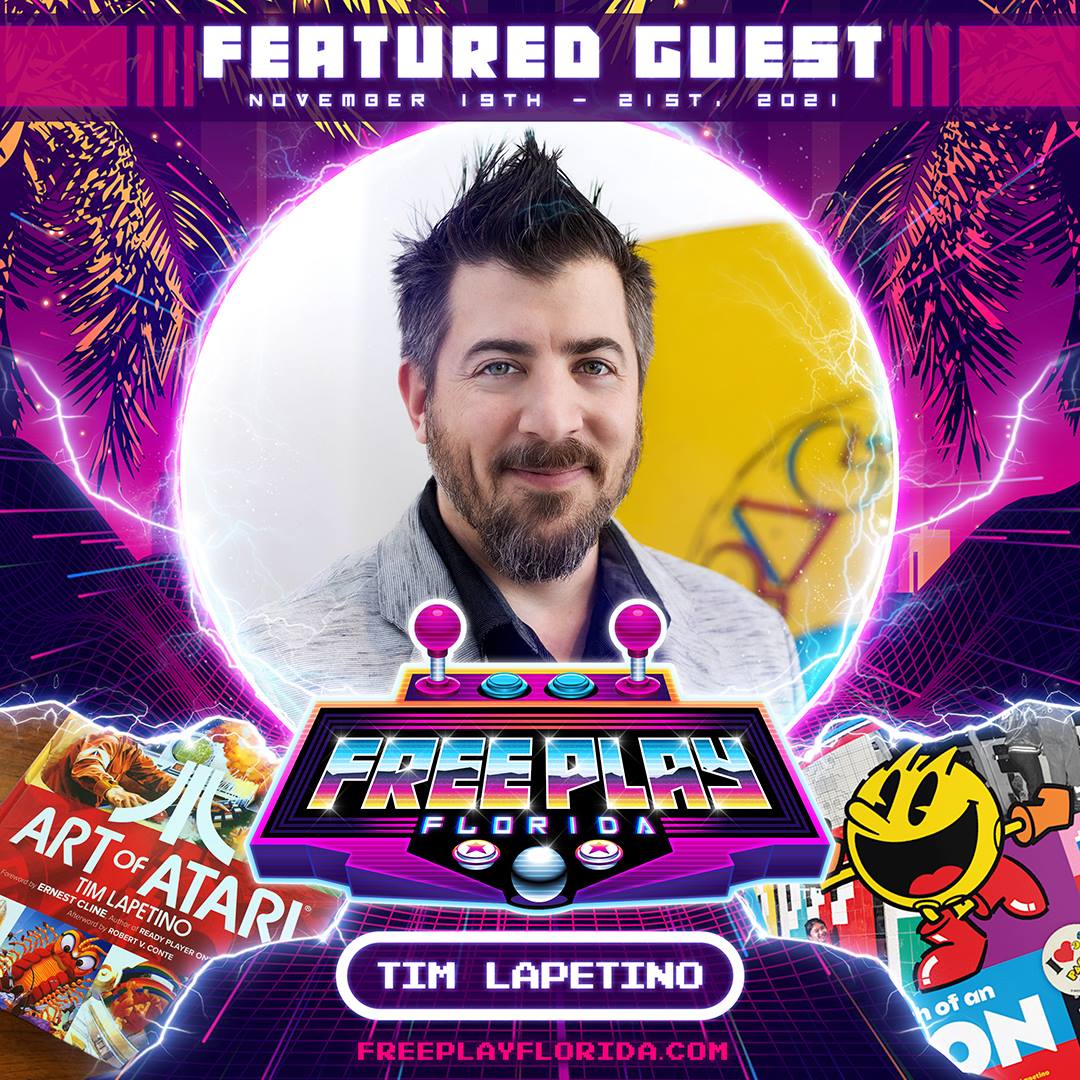 Author of the best selling book “Art of Atari” and the soon-to-be-released “Pac-Man: Birth of an Icon”, as well as the editor of both “Undisputed Street Fighter” and “Sky Captain and the Art of Tomorrow”, Tim’s award winning design work has been featured in more than a dozen books and magazines, and he is widely considered to be thought leader on the design of “geek culture”. 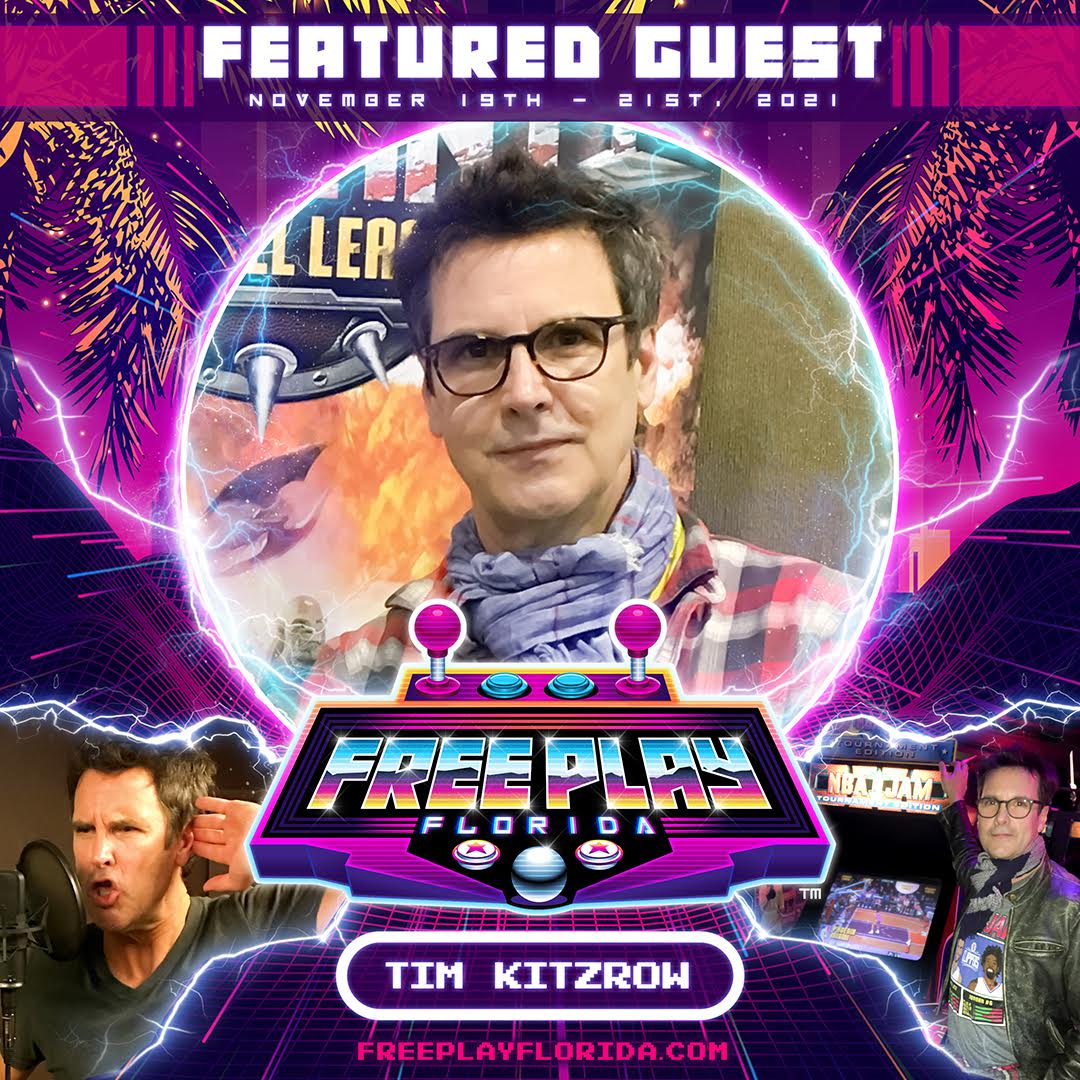 Joining the lineup of gaming and pop culture giants appearing at this year’s event is voice over artist Tim Kitzrow - the voice behind one of the most iconic arcade games! NBA Jam is the seminal 1990’s basketball arcade sensation that has grossed more than two billion dollars worldwide - boasts hundreds of thousands of dedicated fans across the globe who routinely sank quarter after quarter into the game over the past three decades. Tim’s memorable dialogue continues to find a home in the hearts, the minds, and the conversations of pop culture fans everywhere, with lines like “He’s on fire!” and “Boomshakalaka” becoming deeply ingrained in American pop-culture. In addition to NBA Jam, Tim’s voice will be familiar to fans for his other work in games like NFL Blitz, NHL Hitz, MLB Slugfest, and other popular titles gracing home gaming systems far and wide.

Pinball Enthusiast may recognize Tim's voice from machines like Attack from Mars, Deadpool, Elvira's House of Horrors, and his rendition of Rod Stirling in Bally's 1993 Pinball, Twilight Zone. 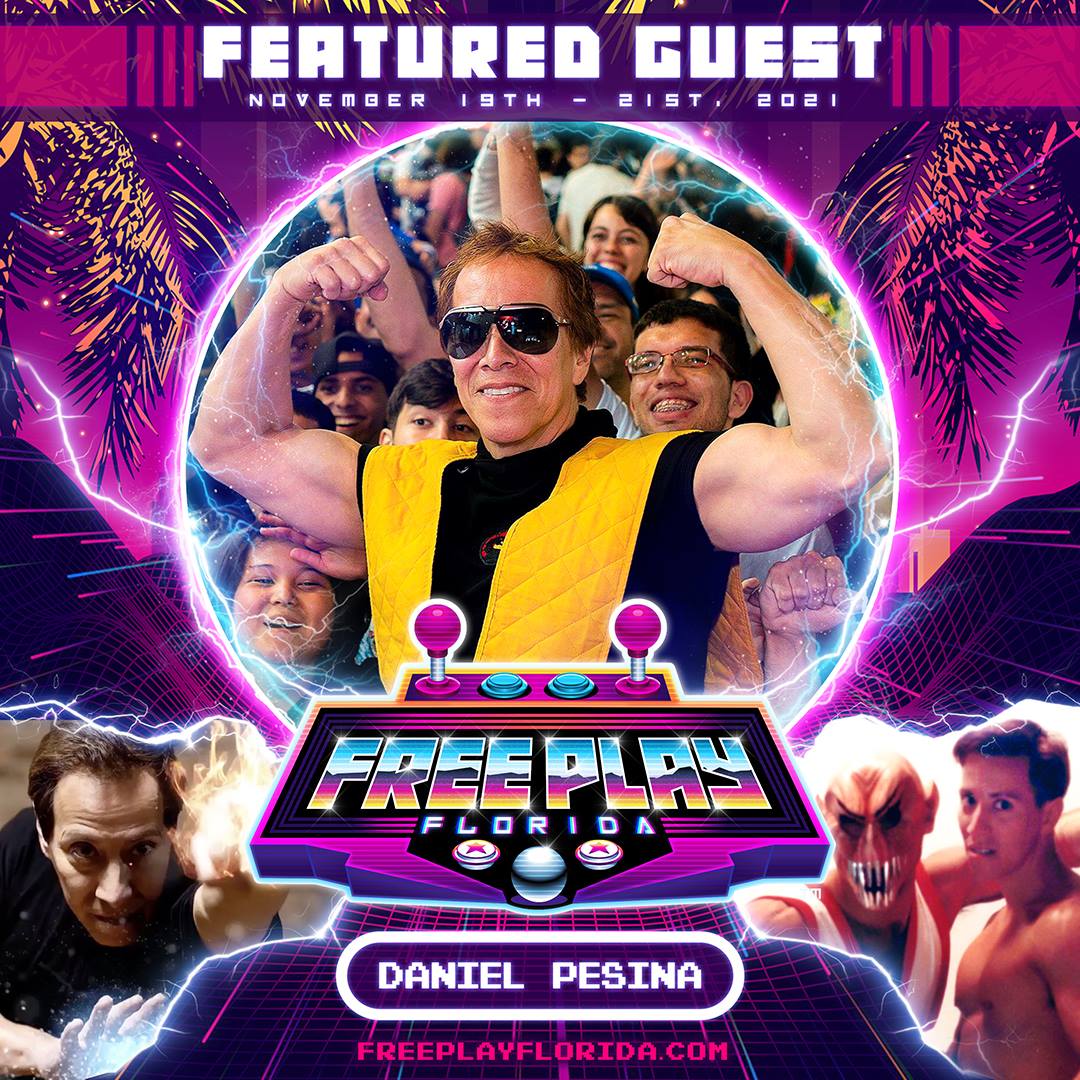 Fans of the legendary fighting game Mortal Kombat will no doubt recognize Daniel as the actor behind the characters of Scorpion, Sub-Zero, Reptile, Noob Saibot, Smoke - and perhaps most famously- as Johnny Cage in both Mortal Kombat and Mortal Kombat II.In addition to his roles as part of the Mortal Kombat series, Daniel has also appeared in a handful of films including the 1991 Teenage Mutant Ninja Turtles II: The Secret of the Ooze.

During his time at the 2019 Free Play Florida event, Master Pesina was a favorite of attendees, staff, and other celebrity guests for his affable charm, sincere commitment to the gaming community, and even for his comedic wit. 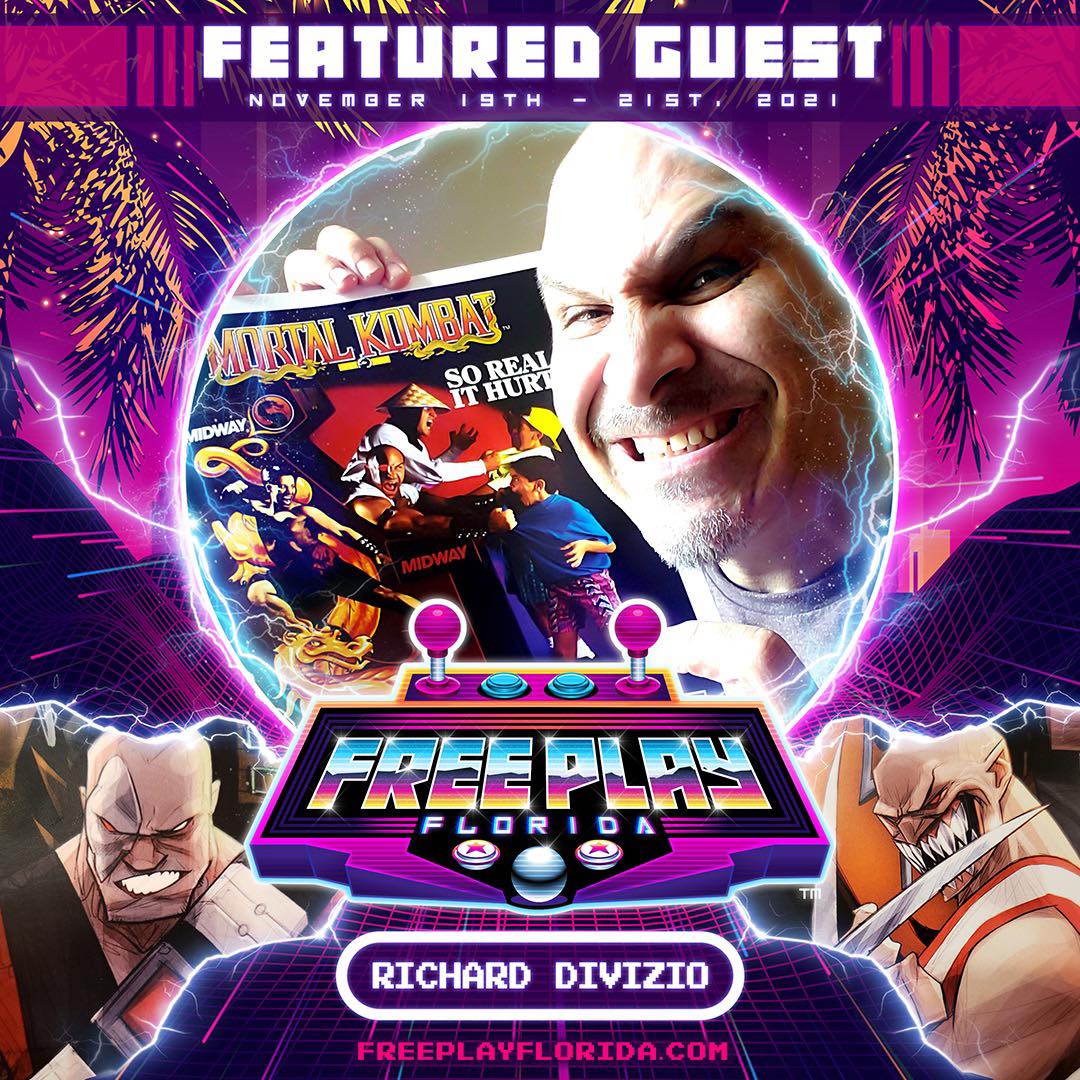 Perhaps best known as the actor behind Kano in the digitized Mortal Kombat games, Richard has also portrayed Kabal, Quan Chi and Baraka in the legendary series, and is the only actor to appear in all of the first three games- even going so far as to coin Scorpion’s famous (and pop culture favorite) catch line “GET OVER HERE!” during the creation of the first game. The actor can also be found appearing in “Teenage Mutant Ninja Turtles II: Secret of the Ooze” and in the Oscar winning “The Dark Knight”. 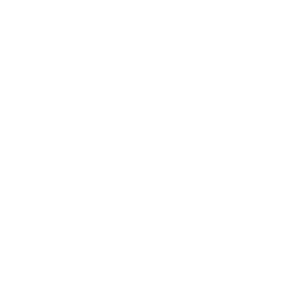 Byte Amusement Group is a 501c3 Organization, with the objective to produce educational, family oriented events whose proceeds provide charitable assistance to local non-profit organizations and people in need.